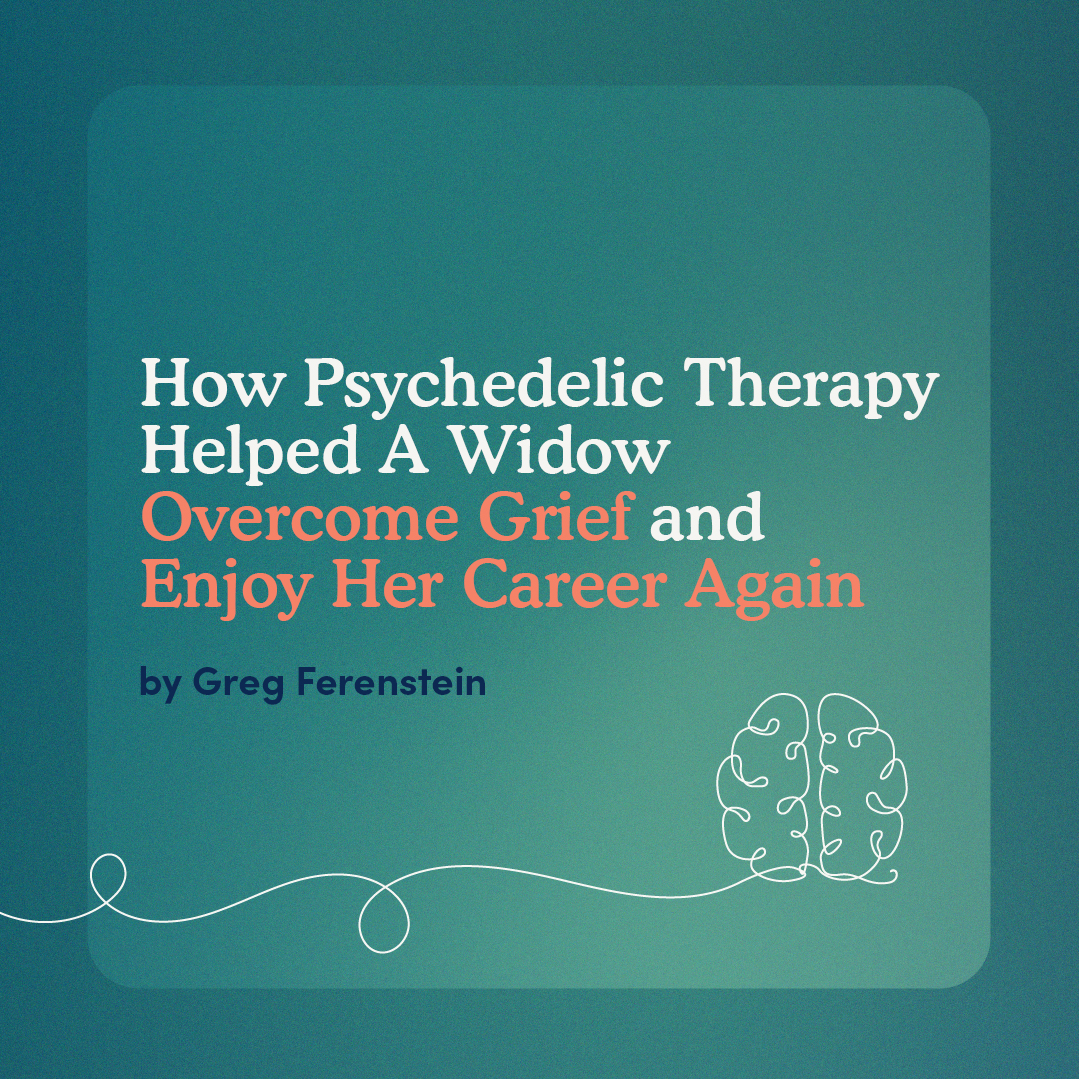 How It Felt Before Psychedelic Therapy: Draining Fear And Anxiety

Sarah returned from her wedding elated; as she approached her 30’s, she was eager to raise a family with a loving partner. The joyous momentum hit a tragic end when a colonoscopy discovered terminal cancer:

“Your honeymoon is supposed to be the most exciting, loving time of your life,*” She recalls, “you're trying to get pregnant [and then] you're told that you're not going to essentially have children and your new husband is going to be dead soon.”

Almost immediately, all the creative capacity she had thrown into her work leading a team at Facebook became laser-focused on saving her husband.

“For the first three-four months, I did not sleep. I just put my head down into research and just connected with people as kind of an escape. But then, when things calmed down, I felt a sense of fear and terror.”

After a 3 1/2-year struggle, her husband passed away. During the run-up to his passing and the ensuing logistics around his estate after, Sarah describes being in a state of constant anxiety.

“I'm typically a pretty bubbly, positive person, and I just was not myself,” she lamented. “My brain didn't seem to work at the same capacity.”

For instance, she tried to distract herself at work, but when an email from a trust attorney would pop up in her inbox, a rush of anger would consume her thoughts.

To its credit, Facebook is replete with mental health resources, and Sarah took advantage of as many opportunities as she could. She recalls hot yoga and extensive talk therapy being particularly helpful.

Afterward, “it just kind of gave me a sense of equanimity”.

Unfortunately, this sense of calm never lasted. Over and over, she would boomerang from temporary relief into a state of debilitating grief.

She left work in search of better solutions.

Without Distraction: The Ketamine Experience

The culture of Silicon Valley is no stranger to psychedelics; over the last few years, the likes of magic mushrooms have gone from the hobby horse of eccentric Northern California inventors into one of the most promising treatments for a range of mental health disorders.

So, Sarah’s friends in the tech industry helped her navigate the still-nascent psychedelics industry.

As of this writing, the only legal psychedelic is Ketamine, a dissociative anesthetic traditionally used to calm patients during surgery. In medical doses, patients enter a blackened dream-like state without much memory.

At slightly lower doses than is typical in surgery, but higher than a recreational setting, patients report entering a dream-like state where they cannot only remember the experience, but deliberately engage with thoughts that otherwise would have been far too painful to deal with sober.

As the ketamine began to take over, Sarah recalls (finally) not distracting herself from thinking about her worst fears. In her words:

Ketamine is a hallucinogen; users often report that important ideas or inspirations will manifest as lifelike visualizations.

Around the time she underwent treatment, Sarah read the 1960s guru, Baba Ram Dass, made most famous by his influential work on equanimity, Be Here Now.

She recalls “communicating” with a version of Dass and eventually coming to imagine ways in which “I can be perfectly happy without children or a partner.”

Sarah says that the intense hallucinogenic experience wasn’t categorically different than the kind of brainstorming she would do in traditional talk therapy;

“Each ketamine experience…it felt like 50 Talk therapy sessions in one go; I did a ton of journaling almost every day throughout all this experience and the insights that would come to me after each journey were really helpful.”

Coming Back To Work

It’s difficult to estimate just how badly the mental health crisis has impacted workplace productivity. The Center for Disease Control reports that over that the US loses over 200 million hours of workplace days due to depression, and in 90 days, those reporting depressive symptoms will lose an average of 11 days of productivity.

Long-term disability due to mental health is harder to track, but one small study out of Sweden found that roughly half of the respondents absent from work had reported income (meaning that they had successfully been gainfully employed).

Sarah says she probably never would have returned to Facebook after losing her husband had she not been lucky enough to receive psychedelic-assisted therapy.

Sarah’s experience jives with much of the findings from recent psychedelic-assisted therapy studies. Compared to traditional antidepressants in randomized trials, Psychedelics, including MDMA and Psilocybin, are roughly 2 to 3 times more effective at treating post-traumatic stress disorder (PTSD).

Evidence from clinics from Field Trip Health, one of the few publicly traded companies focused on psychedelics assisted therapy, finds early results from medical standard questionnaires (PHQ-9 and GAD-7) that demonstrate rapid and meaningful decreases in depression and anxiety scores in patients with difficult-to-treat mental health conditions, including depression, anxiety and trauma. Data from a subset of patients with 1-month follow-up data reveal the durability of these antidepressant effects, achieved with a combination of ketamine and client-centered psychotherapy protocols.

Sarah‘s journey back from extended leave has been an extensive process. This short case study does not chronicle other modalities that she found helpful, including underground work with the active ingredient in magic mushrooms, Psilocybin.

As she slowly re-emerged from the trauma, Sarah not only came back to work but has been placed supporting one of the more emotionally challenging departments in the company, communications and public policy.

“I moved into a new role and I'm really energetic and excited about it.”

Interestingly enough, one of the common reports from patients of psychedelic-assisted therapy is a feeling of gratitude for how past challenges have helped them grow into a new person.

“It’s been hard the last two years, obviously, but I like who I am more as an individual and the person now,” Sarah says”

I feel more empowered; I have resilience; I feel I can empathize with people. And I'm not as judgmental. I think psychedelics are 100% of what helped me get to that point.”

Now, Sarah is passionate about raising awareness of mental health for caregivers. She feels psychedelic medicine led her to what she would describe as Post Traumatic Growth: positive psychological change experienced as a result of adversity in order to rise to a higher level of functioning & consciousness.